The Series Allah In My Art is a humble effort to explore elements of the Islamic arts through a perspective of faith and understanding of Allah through the eyes of an artist.

And to Allah belongs the east and the west. So wherever you [might] turn, there is the Face of Allah. Indeed, Allah is all-Encompassing and Knowing.

Let your eyes peek, your minds grasp and your hearts replenish the power of faith in splendid creations glorifying Allah.

The House of Allah

The most important structure in Islam is Bayt Allah or The Kaaba. It has been modified extensively throughout history. It is a cubical structure, unlike any other religious structure. The Kaaba stands 15 meters tall and 10.5 meters on each side. Its corners roughly align with the cardinal directions. The door is made of solid gold. Muslims are among the blessed who may visit the holy cities of Mecca and Madina.

Domes appear as a part of roofs and ceilings, and are hemispherical structures. The apex of the dome may feature an oculus to permit natural light inside. It is built over the prayer hall. The Dome of Rock is a magnificent example.

A minaret is a spire or tower-like structure featuring small windows and an enclosed staircase. It is one of the oldest elements of Islamic architecture and is found in most mosques. The primary function of the minaret is to allow the muezzin to call worshippers to prayer from an elevated point.

However, thanks to audio technology, speakers have adequately taken over. Qutub Minar in India and the Spiral Minaret of Samarra in Iraq are famous Minarets in Islamic architecture.

Another outstanding element prominent at entrances and interiors are arches. The are four main types of Islamic arches: 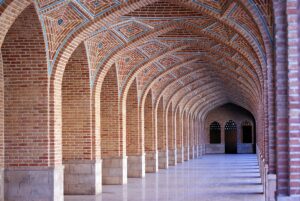 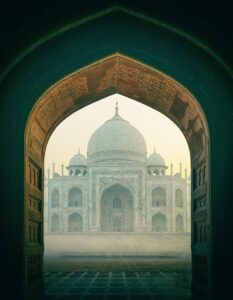 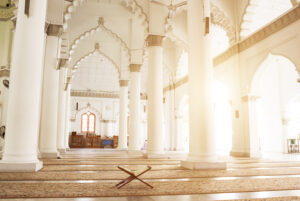 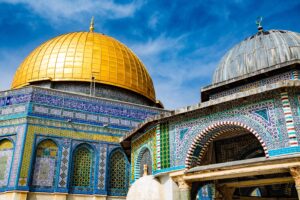 The Dome of Rock is considered the first Islamic monument. Though its exact function remains unknown, it was not planned as a mosque initially. However, it is of unique political, religious and emotional importance to Muslims, Christians and Jews alike.

Different mosques worldwide represent unique structural insights. Revealing various styles, structural variations and elements from their respective builders. A unique mosque worthy of mention is the Great Mosque of Xian in China. Over 700 years old, it is carved completely out of wood. The panels in the Mosque have the entire Quran inscribed on them along with Chinese translations. 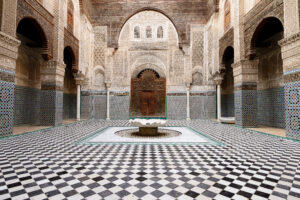 A classic madrasah comprises a prayer hall, library, washrooms, classrooms and occasionally the tomb of the founder. The Madrasah el -Attarin in Fez, Morocco is a magnificent example of a traditional structure.

One of the greatest Islamic structures is also a Mausoleum called the Taj Mahal in the city of Agra in India. Built by Shah Jahan for his beloved wife Mumtaz, the mausoleum is constructed entirely of white marble and includes Indian, Arabic and Persian designs. The marvelous understanding of how marble subtly works with the power of light brings the witnessing individual into a dimension of spirituality.

The first known Islamic care center was set up in a tent by Rufaydah al-Aslamiyah, the first Muslim nurse during the lifetime of the Prophet Muhammad ﷺ.

The first Muslim hospital was a leprosarium constructed in the early 8th century in Damascus.

A Muslim house is a guardian of its most precious feature: the family. The Alhambra, an astonishing example, is a palace that was built in the 14th century. A princely residence, a cluster of pavilions and gardens. The courtyards with a fountain and rooms are exquisitely decorated with colored tiles, carved stucco and wood, and calligraphy. Palaces and forts made it clear with their dwellings. The house was considered sacred, a harem for the women. Thus domestic spaces were created in the image of paradise. 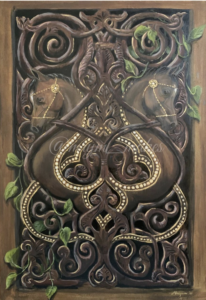 Mariyam Hussein is an artist based in Cairo. She shares, “Art is an important part of my life. Art is for everyone and art is everywhere. It is a medium that connects the collective history of humankind. The act of making art is an act of recording history. The art, artist and audience are all part of a single entity.”

Her artwork, Fatimid Panel with Horses replicates a wooden carved panel from the 11th century. The original panel was once embedded in one of the doors of the Fatimid Palaces in Qahera. Today the wooden panel is preserved at the Museum of Islamic Art in Cairo and an identical panel is at the MET museum in New York.

What makes this panel unique is the two carved horses and biomorphic patterns. One side mirrors the other. Unlike most Islamic architectural designs, this does not have geometric designs or Quranic inscriptions. However, what makes this panel special is that it takes us to the core of Islamic philosophy, the tawheed of Allah.

The view of Mecca is remarkable for its comprehensiveness and accuracy and, in the manner of contemporary topographers, brilliantly combines a plan of the city with a bird’s eye view from about 60 degrees. Muhammad ‘Abdallah, whose grandfather Mazar ‘Ali Khan was court painter to the Mughal ruler Bahadur Shah II, was commissioned by the Sharif of Mecca to depict the sacred monuments of his realm in the second quarter of the 19th century. 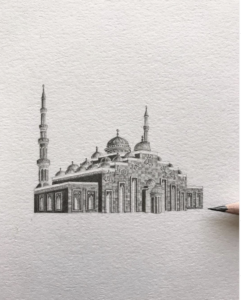 Illustrator Mariam Abbas creates magnificent miniature drawings, which convey the intricate domes and minarets of islamic structures. Her renditions of mosques located in the United Arab Emirates are rich with detail and sketched painstakingly. The works illustrate remarkable diversity in the patterns and shapes of the constructions.

Despite common elements and features, diverse regional styles display differences in the colors, materials and overall beautification of various Islamic structures. Numerous changes to sacred structures due to damage or changing needs of the community remind us of the short extent of our existence on earth.

Next week we shall explore another wonderful element of Islamic Art – Calligraphy!

3 Things That Distract Us From Making A Good Decision
Our Destiny: Ruminating Revelatory Days Ahead
Foundation of A Muslim: The 5 Pillars of Islam
What’s your Reaction?
0
0
0
0
0
0
0
1
0
0
0
0
0
0
0 Shares
Facebook Twitter Whatsapp Gmail Linkedin
×